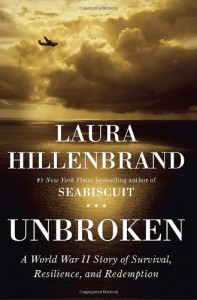 Every once in awhile a book comes along that resonates with me deeply. This is just that kind of book. So inspiring and amazing is the biography of Louis Zamperini. Laura Hillenbrand aka Seabiscuit brings this Olympian, WWII veteran and POW survivor's story to life in such a way that it overwhelms one's mind to believe it's true.

Louis was born to Italian immigrants and grew up in Torrence, California. As a restless teenager he was often in trouble and made a name and reputation for himself. His older brother Pete gets him involved in running track and his life takes a turn for the good. Breaking and setting new records he heads to the 1936 Olympics in Germany and brings pride to his family. Although he doesnt come home with a medal he sets his sights to do so in 1940.

When he returns home and Pearl Harbor is bombed he enlists to serve his country. As part of the Army Air Corps he is part of a bombardier squad dropping bombs on targets.  On a mission and flying in a substandard plane his troop crashes in the Pacific Ocean where he and only two others of his group survive. The detailed account of this experience is nearly inconceivable but astonishingly he survives.

He is finally rescued by the Japanese and held in a POW camp where he treated horribly. The officer Watanabe has it in for him from the very beginning and takes pleasure in his cruelty. By this time the Zamperini family believes Louis is dead until they hear of a radio broadcast where he claims he alive and well. This of course was staged by the Japanese to make the world think they were not mistreating the POW's.

Once the war is over and Louis returns home all is well for awhile. He meets a woman, they marry and have a child but eventually his demons catch up to him. Coming to terms with the nightmare of his past you learn how he meets this final challenge in order to go on with his life and thus see how this man is truly remarkable.

This book left me beyond impressed with how much extensive and painstaking research Hillenbrand underwent to share the story of this extraordinary man to the world.